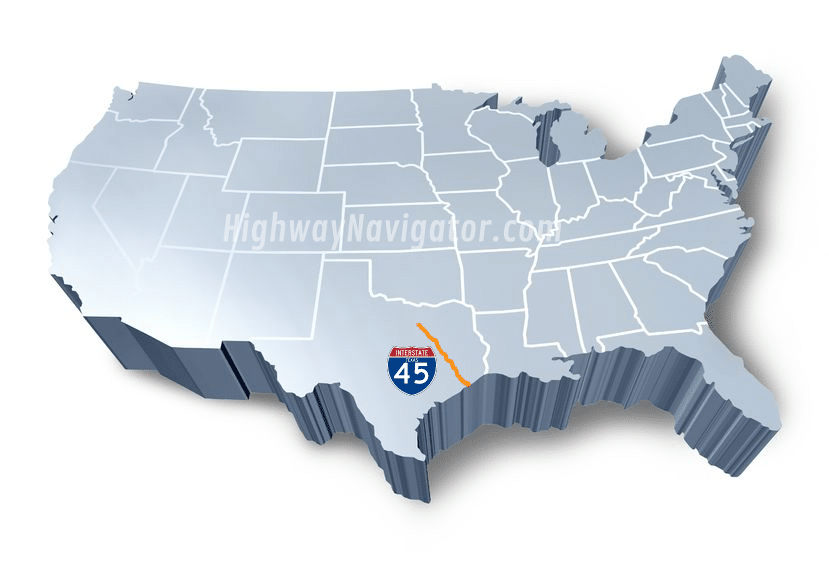 Interstate 45 is an interstate highway located entirely within the U.S. state of Texas. While most interstate routes ending in five are cross-country north-south routes, I-45 is comparatively short, with the entire route located in Texas. It connects the cities of Dallas and Houston, continuing southeast from Houston to Galveston over the Galveston Causeway to the Gulf of Mexico.

I-45 replaced US 75 over its entire length, although portions of US 75 remained parallel to I-45 until its elimination south of downtown Dallas in 1987. At the south end of I-45, State Highway 87 (formerly part of US 75) continues into downtown Galveston. The north end is at Interstate 30 in downtown Dallas, where US 75 used the Good-Latimer Expressway. A short continuation, known by traffic reporters as the I-45 overhead,[2] signed as part of US 75, and officially Interstate 345, continues north to the merge with the current end of US 75. Traffic can use Spur 366 to connect to Interstate 35E at the north end of I-345.

The portion of I-45 between downtown Houston and Galveston is known to Houston residents as the Gulf Freeway. The short elevated section of I-45 which forms the southern boundary of downtown Houston is known as the Pierce Elevated, after the surface street next to which the freeway runs, while north of Interstate 10 it is known as the North Freeway. I-45 and I-345 in the Dallas area, north of the interchanges with Interstate 20 and State Highway 310 (old US 75), is the Julius Schepps Freeway. The Gulf Freeway and North Freeway both include reversible high-occupancy vehicle lanes for buses and other high-occupancy vehicles to and from downtown Houston.