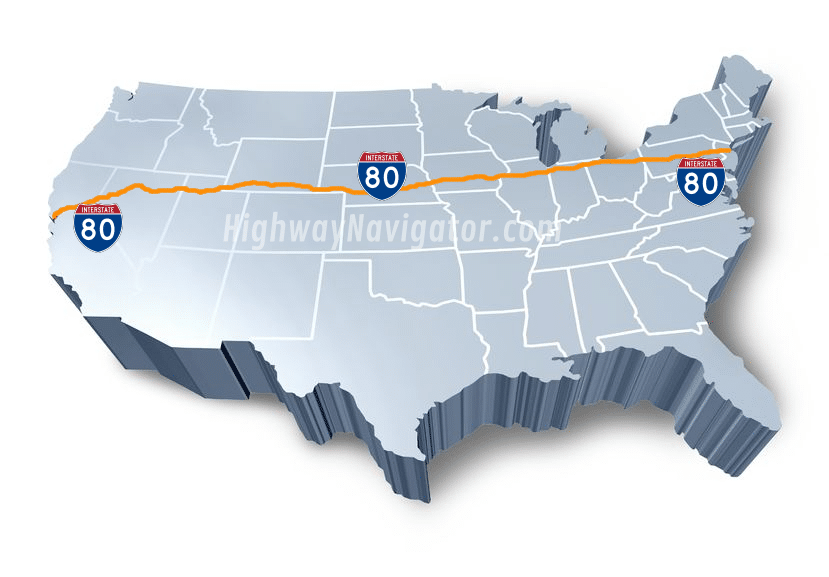 Interstate 80 is a transcontinental limited-access highway in the United States that runs from downtown San Francisco, California, to Teaneck, New Jersey, in the New York City Metropolitan Area. The highway was designated in 1956 as one of the original routes of the Interstate Highway System. Its final segment was opened to traffic in 1986. It is the second-longest Interstate Highway in the United States, following I-90. The Interstate runs through many major cities including Oakland, Sacramento, Reno, Salt Lake City, Omaha, Des Moines, and Toledo, and passes within 10 miles (16 km) of Chicago, Cleveland, and New York City.

I-80 is the Interstate Highway that most closely approximates the route of the historic Lincoln Highway, the first road across the United States. The highway roughly traces other historically significant travel routes in the Western United States: the Oregon Trail across Wyoming and Nebraska, the California Trail across most of Nevada and California, the first transcontinental airmail route, and except in the Great Salt Lake area, the entire route of the First Transcontinental Railroad. From near Chicago east to near Youngstown, Ohio, I-80 is a toll road, containing the majority of both the Indiana Toll Road and the Ohio Turnpike. I-80 runs concurrently with I-90 from near Portage, Indiana, to Elyria, Ohio. In Pennsylvania, I-80 is known as the Keystone Shortway, a non-tolled freeway that crosses rural north-central portions of the state on the way to New Jersey and New York